Recently picked up this book. 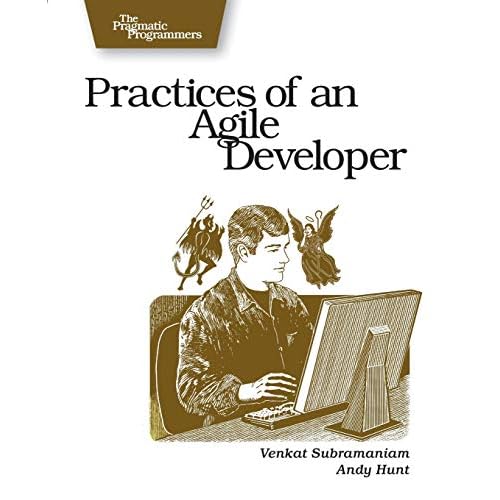 So far it isn't a bad read. I figure if I'm going to chat about things such as agile in this forum then I should at least educate myself a bit.

Maybe I'll do the whole book report thing on it.

Les
at 6:08 AM No comments:
Labels: programming

Sometimes my grumblings lead those around me to believe I may not be a person who is very agile-friendly. I know I come down hard on terminology at times, and for good reason: terms don't a finished product make. Now, I know that I've talked on some of these subjects before, but as long as blogging is cool the topic should be ripe.

My biggest concern with the whimsical world of agile practices is that in my time (which is a limited base of experience I know) I've seen more preachers than practitioners. This is probably just due to my lack of experience and such, but it still keeps me skeptical.

Take the example of a small town church having what is referred to as a "Revival" (common term to those raised in small town churches). Usually you bring in some big name preacher who knows how to put on a show and really entertain the congregation. He usually goes over his interpretation of evangelism and instructs accordingly in a way that just wows the audience. Then in a week he goes to his next venue (or back home) and he's done. He came, he preached, he left.

That's what I see a lot with agile and related topics. Many sensational people stand on their many platforms and evangelize for the cause. Most of which are consultants. And at the end of their contract they move on and spread their teachings to the next victims clients. Their words were all well and good and actually could lead to a good thing, but there was no practice, and usually when they go their methods go with them.

So I guess really my pretension isn't with the process of agile or becoming agile, but with the evangelists who go around preaching the good word but not doing much in the way of practicing what they preach. Since I'm a practitioner of learning by doing I need a doer to come in and do so that I can join in, not so much a teacher coming in to tell me how it should be.

My wife recently wanted to get a logic puzzle for her classroom, just a little something for the kids to mull over. In her Googling she found "The Zebra Puzzle" (quite often referred to as "Who owns the zebra?"). You can Google it and wikipedia it if you wish to cheat, but for those out to sharpen their minds here are the clues we were given.

So, who owns the Zebra?

I won't be the first to offer argument against doing things according to so called "best practice". I feel that if a methodology is adopted as a "best practice" then it probably would be worth my time to follow. I would however put my 2 cents in and say that if all else fails, do something right.

Best practices are exactly what they claim to be: practices. Sometimes we (especially as software developers) get so caught on following the latest best practice that we fail to deliver the most important thing: the product (and yes I am insinuating that these best practices change and often).

It's not so much that best practices aren't worth their salt (it's an expression, look it up) that they are constantly replaced, but practice can only be based on current knowledge (scope if you will). You can only practice what you currently know, and as you practice you may learn better or quicker solutions that you can practice later.

But while I'm honing my skills as a master methodoligist I need to remember that at the end of the day I still have to deliver a product (in my case software) and even if I'm the best at perfecting a practice if I don't deliver software then I don't pay the bills.

this rant brought to you by the letter b