The world is full of jerks.

So the other day in Best Buy I'm waiting in line to pay for a gigabit ethernet switch because you know you can never have too many of those lying around. This guy in front of me is complaining into the air about the line and how they only ever have one cashier working at this place (they had 3) only he wasn't just complaining to himself he was talking on the phone with one of those little Bluetooth ear pieces.
My entire wait was listening to this guy ramble on for at least 3 different phone calls at the volume of "I-am-the-only-one-here-that-matters". Mostly I ignore him, although he had the lovely smell of cigarettes radiating from his person (seriously do people still smoke?).
Mostly I just ignore him and check out all the stuff along the line that the store would have me think I need last minute. It's possible that this guy just received this ear dongle for the holiday and doesn't yet realize how much of a douche it can make one appear to be upon use. Well that idea was short-lived as I followed him out of the store and see him get into his vehicle parked in a handicapped parking space. He was alone, he wasn't limping. he = douche.
I'm thankful for people who have respect for others.
until next time
Les
at 8:27 AM No comments:

All exits are beyond the plastic. 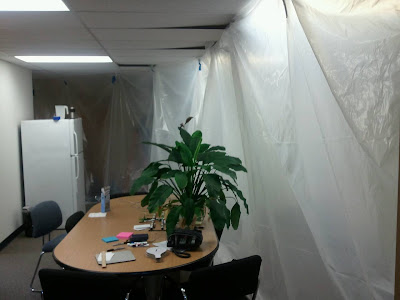 So they started the construction of our office remodel. Things are going to be pretty crazy around here for s few weeks.

It can be pretty hard too focus in all the chaos and noise.

The enemy of my enemy.

Since being involved in Web development for the greater part of the last decade I have to admit that Flash (once helmed by Macromedia now a part of the Adobe creative empire) has been a thorn in my side. Flash drives the majority of what I hate about the internet:
Don't get me wrong, I'm not against online advertisements. I understand the value of free information and entertainment. But why you have to choke my bandwidth and interrupt my focus with some animated, noisy (before they got realistic and muted them by default) cartoons trying to get me interested in some completely irrelevant to me product? Lightweight adds can be just as elegant and communicate a product in a way that doesn't piss me off. If you piss me off I'm not going to be interested in your product.
Flash websites are the bane of the world wide web. Sure you can do some pretty cool effects and animations and page switching and all but if I wanted to play a game I probably wouldn't be coming to your website to find your information. I'd play a game. Hollywood has found that design companies who use flash are really good at marketing for their movies, and I can't say that's a completely bad thing, but if the bandwidth you use to communicate what you are presenting is almost the size of the bandwidth it takes to watch the trailer for your movie then please forgive me for finding your content on YouTube.
Holiday memes...
Recently though there is a huge brouhaha in geekdom about the choice of a particular fruit-logo'd company not giving Flash any love especially in regard to it's latest innovation of porn-on-the-go devices that has all the hipsters raving about how we've arrived.
Most people that know my technical, geeky side know my feelings toward the maker of the Mac. As such I have had to consider where I really stand on this issue. Not that where I stand really matters in the greater scope of things, but I needed to know.
I'll let you know. To be continued...
Until next time
Les
at 9:05 AM No comments:
Newer Posts Older Posts Home
Subscribe to: Posts (Atom)